Known as “the teardrop of India,” Sri Lanka, is an island country located in the Indian Ocean off the southern coast of India. The topography of Sri Lanka consists of tropical forests, coastal plains and mountainous areas. As diverse as its geography, Sri Lanka is home to a variety of ethnicities, languages and religions.

Sri Lanka is a popular outsourcing destination because of its software outsourcing capabilities, high level of education, and technical proficiency of its engineering teams.

Sri Lanka engineers and developers are highly proficient in communicating in English.

Sri Lanka recovered from a civil war that lasted more than 25 years between the government and the Liberation Tigers of Tamil Eelam (LTTE), where more than 70,000 people were killed and approximately 250,000 people were displaced. Talks regarding constitutional reform continue between the government and the LTTE. While political strife can make interim outsourcing relationships difficult, American companies can benefit from the renewed vigor and a renewed economy. Currently, Sri Lanka’s per capita GDP is around $11,068.99 and it’s predicted to emerge as one of the world’s fastest growing economies.

In January 2015, Maithripala Sirisena was elected as president of Sri Lanka after beating veteran Mahinda Rajapaksa. Sirisena was later accused of corruption and authoritarianism during his election. Currently, Sri Lanka offers a stable environment for software outsourcing initiatives.

The ecosystem of Accelerance Certified Expert (ACE) partners includes companies from Sri Lanka that have been thoroughly screened and vetted. These ACE partners have good command of English and have agreed to Accelerance’s terms for intellectual property protection.

Interested in outsourcing your software development work to Sri Lanka? Contact us, we'll help you find the right development team. 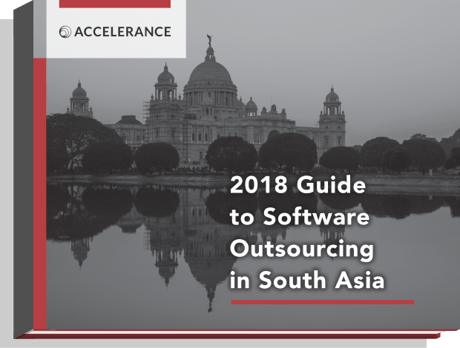 The 2018 Guide to Software Outsourcing in South Asia provides up-to-date insights for companies considering South Asia as an outsourcing destination.