“How much should I expect to pay when outsourcing my software development?” This is a question often asked by technology and business leaders, even those who have outsourced before. The answer, of course, depends on several factors.

All but one have to do with the value a software development partner will potentially bring to the organization. The remaining factor is cost. Logically, then, cost should be weighted accordingly when it comes to making your decision. However, the reverse is almost always the case.

Obsessing too much about the price imperils all purchasing decisions, whether you’re buying a car or a house, or engaging a remote team to develop your company’s critical software.

Don’t lose sight of what is even more crucial: the value of the product or service itself.

Over the past few months, the imperative of so many companies has been to reduce expenses to extend their “runway”. So, it is understandable that price might dominate the conversation – but be mindful of the tradeoffs.

This was the case for a smaller company that recently came to Accelerance for help. They needed to reduce their software engineering spend, which had been around $125 per hour (per person, fully loaded). Their goal was to achieve a 50% savings, so a target cost of $62 per hour had been set for the blended team.

Imagine their excitement when they looked around and found two outsourcing options in the $30 per hour range. Suddenly, that was a “fair” rate, and their original target of $62 per hour looked well above market. In their rush, they never considered what they were sacrificing to get such a bargain.

One of the two potential partners they found was a 10,000-person group in Latin America. Because the client was a small business with 70 employees, including a team of 16 engineers, the two companies were not culturally aligned and the project would have most certainly floundered.

The other group was also quite large (1,500 people), and located in Vietnam. Given the disparity in time zones, communication issues and staff turnover would have been a challenge. To allow some workday overlap with the US, the Vietnamese developers would be put on a late-shift schedule which is difficult to sustain. This most certainly leads to team turnover and production delays.

Those are big figures, but all they tell you is the cost of those resources. If they don’t produce the intended results, the value to your organization is zero. In the long run, an investment that sews resentment and frustrations within the rest of the team, and potentially fails to meet its objectives, has a negative overall value.

Accelerance was able to find a partner with a workday overlap that better met the client's needs, at a cost of $50 per hour for a blended team. Over an annual spend of $1.4 million, this still produced a 60% saving for the company. Two months in, the CTO was impressed with the results: “It’s the best outsourcing experience I have ever been a part of.”

A 60% saving yielded real success, while a 76% saving – that might have looked better on paper – would have resulted in frustration and, quite possible, a failed project.

What determines an outsourcing rate?

The factors taken into account when determining outsourcing costs are fairly standard. The final rate needs to provide a sustainable income for the engineer in the local market, and an acceptable profit margin for the development company. Whether you are using a team in San Francisco or Sao Paulo, the formula is the same:

Fortunately, the cost of living is generally lower in the more popular outsourcing destinations. Add in favorable currency exchange rates with a strong USD and near or offshore software development becomes a cost-effective option.

What is “cheap outsourcing”?

If you have been contacted by a random outsourcing company, chances are you have been offered rates as low as $15 per hour. The companies you have to call can charge as high as $300 per hour. At Accelerance, we consider the prime range to be between $25 and $80 per hour. While companies priced above that range will be good, we highly recommend you discard all options below $25 per hour, regardless of location. That is “cheap outsourcing”.

Outsourcing software development is a proven way to reduce costs. But by choosing a low-cost option, you are essentially making a trade-off. The question is, what are you willing to sacrifice?

There are some great deals out there that don’t compromise on quality – and Accelerance would love to help you find them. We’ve investigated 8,000 software companies around the world so you can outsource with confidence. Want to know who to trust? Talk to us. 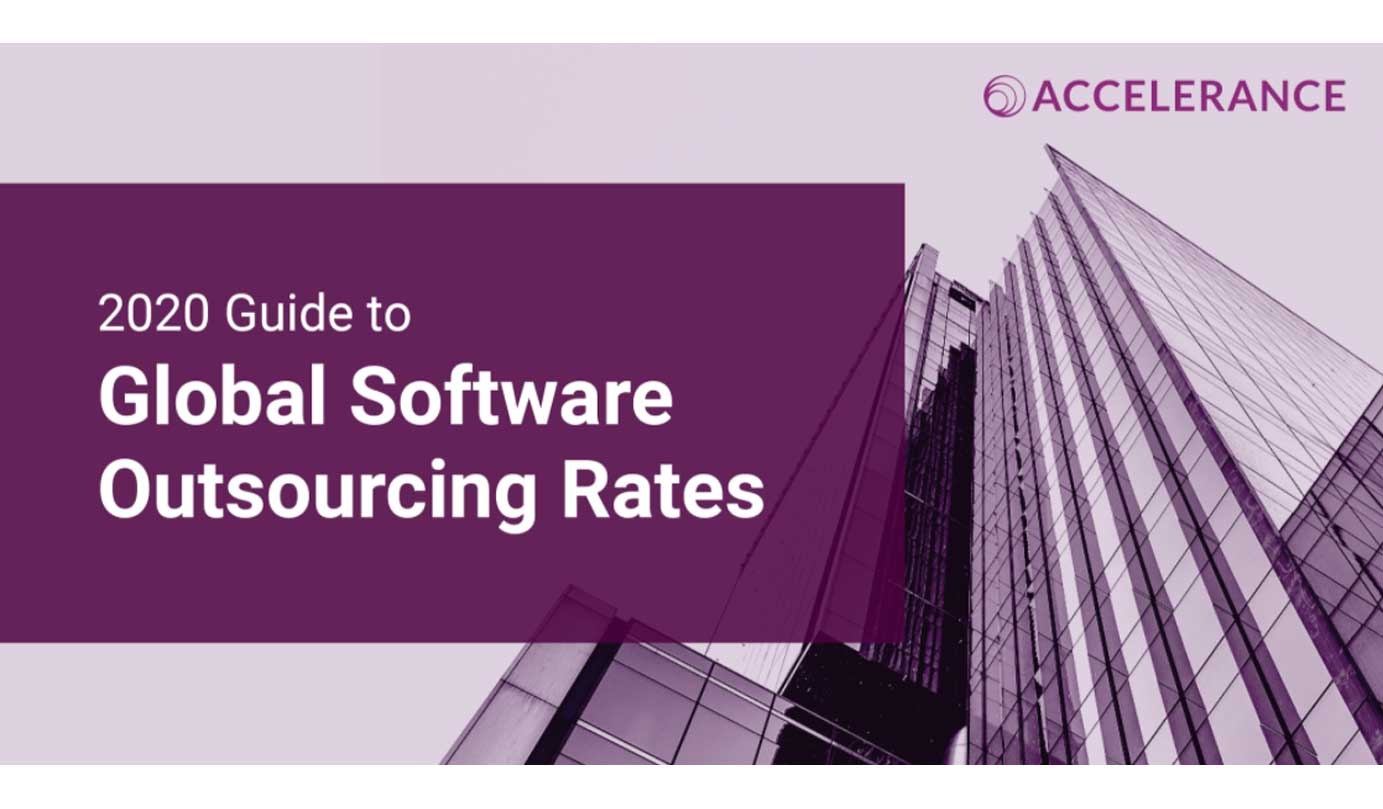 The company I was working with had made a smart business decision – to start investing in digital transformation to build tools and resources that would increase their connection with customers.

You can drive up Vitosha mountain for a great view of Bulgaria’s capital, Sofia, spilling across the valley floor below.

For a country of just under three million people, Armenia has made a remarkable impact on history. The Soviet’s MiG fighter jets? Designed by an Armenian. The brains behind Apple’s iOS mobile...

Gain insight into the latest rates for software development outsourcing resources with our proprietary benchmarking guide that offers: