Insights | Spotlight on Bulgaria: The Height of Software Development in the Balkans

You can drive up Vitosha mountain for a great view of Bulgaria’s capital, Sofia, spilling across the valley floor below.

Our Accelerance team was treated to a different perspective when a partner we’d come to visit invited us to take a look at their new premises in a high-rise nearing completion downtown.

“They were still doing the finishings, but the lobby had all the hallmarks of a beautiful Manhattan-caliber office building,” says managing director Mike McAuliffe, who rode a construction lift to the roof, more than 40 floors up. “The panoramic view of Sofia was spectacular.” 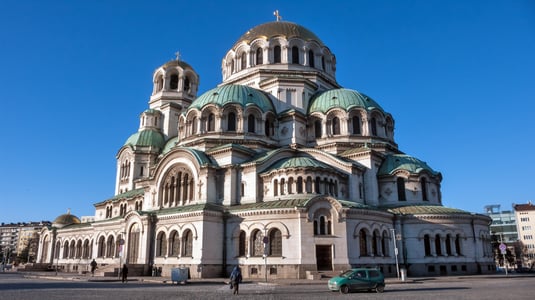 We flew to Bulgaria via Munich to kick off an Eastern Europe trip that also took us to Romania and Poland. Using Sofia as a base, we drove across the Romanian border to Bucharest, which is only 250 miles away, then back to Sofia to catch our flight on to Krakow.

Our two Bulgarian outsourcing partners are among the largest in the country – well-established, award-winning operations that are smart, reliable and hyper-professional. All the professionals we dealt with spoke fluent English.

The second group we visited doesn’t have quite such a lofty view but a great location of its own in a modern office park. The company also operates a separate recruiting division that funnels industrial-strength engineering muscle into the business, which has expanded into Romania, Poland and Germany.

Bulgaria has been called the technology capital of the Balkans, but despite the maturity of its outsourcing sector, the country is often overlooked by Western businesses. “So if you come, you get white-glove treatment,” says Mike. “They work hard to impress and compete for work.”

Rates for software engineers are also more competitive than in Central Europe, which is expensively priced.

While Sofia is the country’s main tech hub, satellite centers are developing in cities such as Plovdiv, in the south, and Varna and Burgas on the Black Sea coast. Varna, a popular seaside resort about 270 miles from Sofia, is the perfect place to combine work and play. In the 1970s, the oldest gold treasure in the world was found there, dating back to around 4600BC.

The capital itself is a lovely city to explore on foot (or go for a jog through the parks, as Mike did most mornings). Echoes of the Soviet era can be seen in the architecture – you can book in for a communist-themed walking tour. But the vibe on Vitosha Boulevard, a pedestrianised strip with shops, restaurants and bars reminiscent of Las Ramblas in Barcelona, reflects a country looking less to the past than the future.

Accelerance travels the world to simplify your search for the best offshore companies – and we’re impressed with what Bulgaria has to offer. If you’re interested in outsourcing your software development, contact Accelerance to find out more.