I have always wanted to hike the Inca Trail. Recently, my software travels took me back to Peru to investigate great software teams. ...It was on my bucket list.

Highlights from my Software Travels to Peru

My travels took me to several potential partners across the country, and I walked away impressed with the wide range of capabilities of its developers. The focus seems to be on web and mobile applications, specializing in:

Developers in the country have experience with the CodeIgniter, Rails, and Django frameworks, and are familiar with scrum and agile development processes that are increasingly used in U.S. software development.

I’d be remiss not to talk about the country itself. On any business trip you’ll always have a bit of downtime, and I took a break to hike the legendary Machu Picchu trail. But there’s plenty of other things to do, given the region’s rich Inca heritage.

It is believed that civilization began in this part of the world more than 15,000 years ago. In fact, it is one of the six oldest civilizations in the world. The Norte Chico civilization included the Incan Empire, the largest dynasty and empire of pre-Colombian America.

Don’t forget to check out the food scene if you’re in Lima. The traditional dishes are exciting and delicious. The food truck craze has reached new levels – sophistication mixed in with traditional dishes and native vegetables. You’ll also find restaurants with amazing ocean views and incredible seafood in this coastal city.

Political and regional turmoil through the late 20th Century kept investment away from Peru while others cashed in on the technological revolution. Newfound stability has changed that, with service providers from other Latin American countries setting up shop across Peru to expand their own operations.

Evidence of this growth is expected attendance at the 2017 Peru Service Summit, where 130 companies across all industries -- including software development -- meet with investors in 19 countries to discuss business relationships. It is estimated some $343 million in deals have been consummated over the six editions of the Summit, and this year’s conference will be the biggest yet.

Latin American software development firms expanding into the country have set high standards for employment, ensuring the developers they hire have the tools necessary to work in an global economy. These students graduate from the best Peruvian universities fluent not only in English but U.S. business culture.

Download our Free Guide to Outsourcing in Latin America today.

On my recent visit to meet with software companies throughout South America, I reconfirmed that the region has no shortage of IT talent, and Peru is no exception. While Peru’s universities do prepare students for the world adequately, top companies also provide their employees with in-depth training and certification opportunities much like U.S. software companies do.

With visas harder to obtain due to the Trump Administration’s changes to the H-1B visa program, outsourcing is emerging as a popular solution to the difficulties in bringing developers here to the states. Peru is attractive option because of its proximity to the U.S. and similar workday schedule, something that’s come to be known as nearshore outsourcing.

Peru is on the same time zone as the Eastern U.S., and with no tourist visa required to enter the country it's easy to maintain a face-to-face relationship. The country is a six to eight hour flight from most major U.S. cities, not much longer than a cross country flight from New York to Los Angeles.

Accelerance travels the world to simplify your search for the best offshore companies and we remain impressed with what Peru has to offer.  If you’re interested in outsourcing your software development, contact Accelerance to learn what your options are. 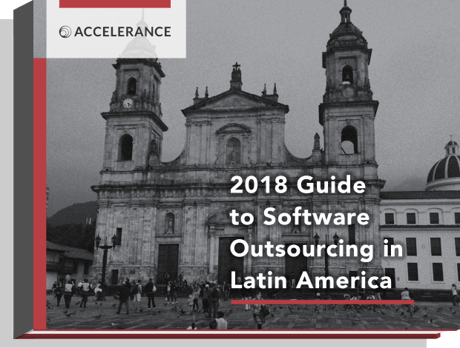