Now is the time to start thinking about your 2018 software outsourcing costs. It may seem early, but remember it takes time to implement the significant changes that outsourcing requires. Waiting until December is unwise: you never know if internal issues may arise, or worse yet an outsourcing effort might not work out at the last minute.

Outsourced software development is a perfect example. It can take several months to ramp up an outsourced software development team, and that’s if things go exactly to plan. But as we all know, life likes to throw us curveballs, and the same thing can happen while outsourcing. Those issues can drive up your software outsourcing costs, and we have firsthand experience with a client where a mix of internal company issues and poor decision making ended up being a costly mistake.

A Tale of Out of Control Software Outsourcing Costs

Our Silicon Valley client had a rough couple of years. Product development schedules slipped because of issues in hiring enough developers. Well behind schedule, the company needed to make some changes.

First, management made the decision to fire the VP of Engineering. They didn’t stop there: they also fired most of the developers, many of which were hired out of desperation rather than their software development skill, and replaced these developers with better-qualified direct hires. But their next move was even more puzzling: management decided to use  a “boutique” software outsourcing company from San Francisco to augment the new development team.

Now I’m sure you’re a bit puzzled, as most of us think of outsourcing overseas to save money versus the higher costs of freelance developers here in the states. But in a way it made sense to them: it seemed like the safest approach to building a development team quickly (and nearby) that they knew for sure had the qualifications they were looking for. But this approach was very costly PLUS the outsourcing firm required an expensive add-on to manage the outsourced team.

The company was spending money hand over fist. Shortly after this move, the company hired a new CFO, and he couldn’t believe what he saw.“Why are we spending all this money on product development?” he barked in one executive management meeting. “Don’t you guys know about offshoring?”

Of course they did. The CTO and VP knew about both offshoring and outsourcing, but weren’t thrilled about either. The company was already outsourcing business processes like data entry to India. They could easily expand that operation to include software development too, but they did not want to tackle the challenge of Agile development with a 13 hour time difference. Yet the boutique software outsourcing company was bleeding the company coffers dry.

“We have to do something. We’re literally spending millions more than we have to and I don’t want to go to another executive meeting without options,” the new CFO mused.

What You Can Do, And This CFO Did

I will point you to another post Accelerance co-owner and President Andy Hilliard wrote about the total cost of outsourcing. As you can see from those charts, the optimum price point a medium software company should pay is somewhere between $20 to $40 per hour. Accelerance Verified partners are priced in this range, and are competitive with large or “tier one” firms.

While these rates are more expensive than a freelancer from platforms like Upwork, you gain the peace of mind that the team of developers you’ve outsourced to are trained properly, and they’re easier to manage. They’re also less risky in terms of your intellectual property due to increased oversight.

As opposed to large or “tier one” firms, Accelerance deals with firms large and small (these firms typically take on large clients). Additionally, our Accelerance Verified partners are more invested in your project. To large tier one firms, in most cases, you’re nothing more than a number.

But price isn’t the only thing you should consider. We suggest you also keep in mind the following factors to ensure you budget properly:

Including these in your budgeting will give you a much more accurate picture of your software outsourcing costs, and minimize surprises.

As you can see, outsource budgeting is an intensive process. Don’t wait until the end of this year to evaluate your software outsourcing costs as it may take weeks and even months to evaluate options and make a smart decision. This is time well spent, though. Remember that Silicon Valley company I mentioned earlier? After its first costly outsourcing mistake, they turned to Accelerance for help to do it the smart way.

They’re now saving more than $5 million a year by planning wisely, and outsourcing their software development to Latin America instead of San Francisco. You might find a different region better suited to your needs, and save yourself more money on software outsourcing costs than you thought possible.

Get in contact with us here at Accelerance today to see what we can do for you. 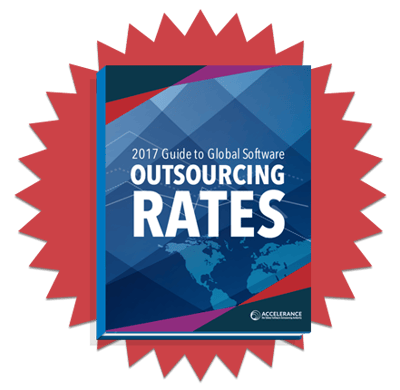 Discover up-to-date offshore, nearshore and onshore software development rates with the true-cost analysis you need to make an informed decision when hiring a software outsourcing company.